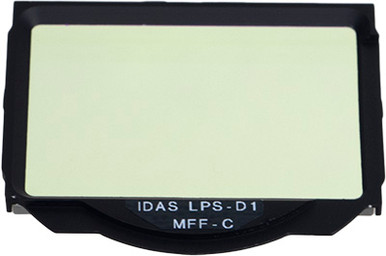 Similar to LPS-P2, LPS-D1 uses IDAS's proprietary MBT (Multi Band-Pass Technology) to cut the emission lines of mercury lamps and sodium lamps that are the basis of light pollution, and transmits light from other celestial bodies as much as possible. With the MBT technology, it is possible to obtain a very large number of transmission bands while cutting light pollution and provide color-rich images. Since LPS-D1 has a low attenuation rate for continuous spectrum objects, galaxies, reflective nebulae, star clusters, etc., the D1 is also suitable for use with these objects. The same thing can be said of this feature also with visual observation.

LPS-D1 is coated with IGAD (Ion-Gun Assist Deposition) adopted in LPS-P2, LPS-V4, BGR Type 4 and others. IGAD densifies the multilayered thin film which is the heart of the interference filter, and the following properties which can not be obtained with the conventional multilayer thin film are obtained.

1. The durability of the thin film is further improved. The hardness of the thin film of each filter is comparable to quartz glass. In addition, the adhesion between the multilayer thin film and the filter substrate has been remarkably improved.

2. The temporal change of the spectral characteristics due to temperature and humidity in the environment that humans live can be negligible