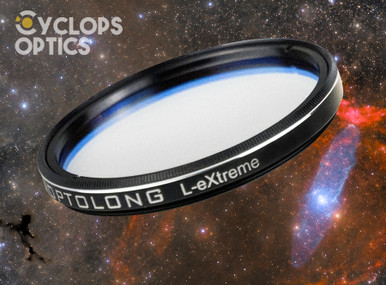 Optolong L-eXtreme is a two 7nm bandpass filter which can be used with one-shot color cameras like DSLR's (digital SLR), and monochrome CCD cameras, it is also more suited for fast systems. The convenience and cost effectiveness of this filter allows amateurs to image a rich emission nebulas, even in bright, light pollution skies. Optolong believes the design of L-eXtreme filter would be better choice for fast systems in competitive price. It isolates the H-Alpha, and Oxygen III nebula emission lines so that the contrast and signal-to-noise ratio between nebulae were maximized. For people who is living in very light polluted areas, or when the moon is out, the L-eXtreme will be a good filter.

The advantage of the L-eXtreme filter is that there is no transmission between the H-beta and OIII lines, as there is no nebula emission lines there. In this case, it isn't letting light pollution come through so that maximize nebulas signal and make the sky background darker while imaging. The L-eXtreme filter should better isolate the emission lines only and better protect from light pollution.

Unlike the L-eNhance filter which is a tri-band (transmits Hb, Ha, and OIII), the L-eXtreme filter is dual band that passes Ha and OIII emission lines.

Hydrogen is the largest, the most primitive, the simplest, and the oldest element in the universe. Scientists consider that Hydrogen amounts to more than 90% of visible substance in space. Our sun is 5 billion years old, but so far hydrogen is still the key matter of nuclear fusion. While the sulfur element does not have much scientific significance, so keeping H and O is meaning for exploration of life.
Therefore, we highlight H-a, H-b, O3 and O2, and reduce the signal of sulfur.

How to read the chart?

▲The horizontal axis is the Wavelength in Nanometers(nm).

▲The vertical axis is transmission in %.